What a grreat catch!

Sooo... i was kind of busy in mai refilling all the spectrometer during the week and going for bike rides during weekends - but i finally made one of my long awaited trips again. i joined daniel (who twisted his ankle at last football game - dangerous sport) and a friend of his as a driver on a trip to הגליל‎ around the ים כנרת.
I reviewed some places i already knew, but i explored some new places too. i have to go through all the photographs before i can tell the whole story.
Anyway, i got a couple of good shots, and got lucky again. We spent friday noon in Tiberias and had a great grilled peters fish with lots of garlic on a nice balcony right next to the lake. We watched a black-crowned night heron fishing - pple were throwing pita into the lake to watch the fish eating. There were some smaller ones, some tilapia and catfish. So the heron became interested.
When we decided to go I got up, took my camera to take a last shot of the heron, I did not realise he just caught a peters fish, when I pressed the trigger until I saw the photograph *ggg*. 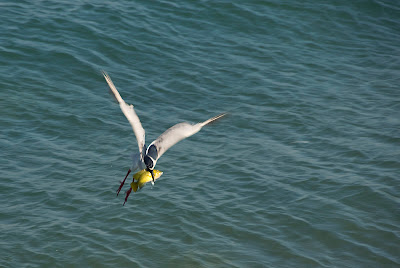 Posted by rubbergumlovinbear at 10:18 PM