Well - this a very controversial topic as you can imagine. The بدو النقب have always been in the desert, the israeli government built cities for them, half of them moved there, the other half still lives in the desert and builds huts out of currogated metal - to be honest some of these communities look like real settlements.
They are illegal for the government, the bedouin say its there land (of course they have no documents).
There are lot of stories, some of the bedouin are involved in smuggling (and traficking), or demand protection money, and they are said to do everything... e.g. the employees in the local "coffee to go" variant in the negev were bedouin.
A number of bedouin men serve in the israeli army, while others go to gaza to look for their brides - I guess you get the picture: "It's complicated"... 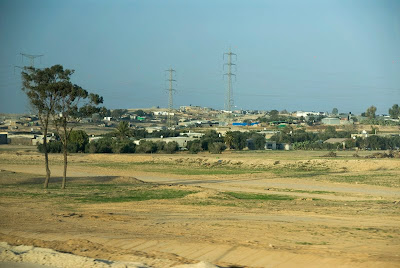 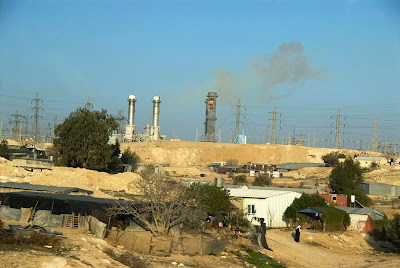 Anyway, the story I wanted to tell is from the hospitality concluding our trip - the young bedouin on the left told us about a bedouins life - as much as you can learn in half an hour - interestingly it is quite a bit.
When strangers come to the camp, they always approach the part of the tent that belongs to the men, when he comes from another direction he goes round the camp first. The reason is, that the animals are kept there, who will warn the men inside when a stranger comes.
Before entering a tent, one "coughs" (instead of a bell) - shouting "here I am" is considered inpolite.
Strangers are offered coffee, bitter as the desert (with tasty cardamon) - the cup is not full, first round is a welcome, second round ensures the guests protection by the host, third round is for pleasure. If the cup is full, the guest is not welcome...
Then chai is served (bedouin tea is something special, made by desert herbs/flowers) which tastes sweet, which should symbolize the good things that are to come.
Also interesting is the way the tents are made - the walls are made by a mix of camel hair and sheep hair, the roof is made by goat hair (goat hair got fat that insulates against water). I'm not sure if I remember correctly, but I think the western wall is always closed because of the wind, the eastern side is open, the men are in the northern part, women in the southern part (correct me if I'm wrong). 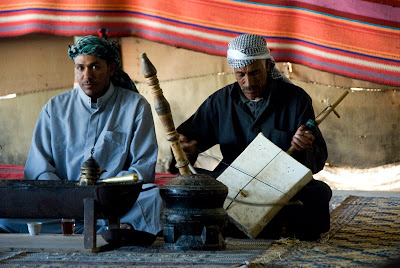 Then the work of women and men was explained. Women do everything in the house, they build the houses, they milk the animals. They make cheese, they collect wood and bring water on the way home. Men make coffee and have to stay in the tent in case a stranger comes by.
The men appreciate the work of the women, this is why the have more wives. The القرآن allows men up to four wives. We were told this has another reason:

"When a man is young he finds a bride. After a few years love is gone and only a headache remains. The man goes to the sheik and asks for help. The sheik tells him to get another wife. The man is confused - his wife is the reason for the headache. He asks again. The sheik tells him he will see. The man goes and marries another woman. His two wives start fighting, and the man has a peaceful time. After some years his wives became friends and the headache is back twice as bad. This time he already knows what to do."

We were told that bedouins follow their headaches more than the Qur'an - not far from there lived a man with 31 wives and more than 60 kids.

We became curious and asked the guide "How many wives do you have?"

He said: "I have one wife and two children. My wife is a teacher and every day on the way home from work she buys aspirin for me..."
Posted by rubbergumlovinbear at 9:35 PM