Simba in the terrible twoes

Today our group made a trip to Eshkol Park, a site which played a very important role during world war I.
The Anzacs come from egypt to fight the turkish army and were stuck in israel with a long front - a huge battle with lots of victims: History.
Simba didn't like it at all, but no encouraging nor electroshocks from the grownup cars would convince him to keep going. He just flashed all the lights and stopped at the side of the road.
Check out Leah's Pics.


Long story shorter, a mechanic came, with a young(ish) blonde woman with red lackered nails on the passenger seat (i was told, that is quite common in israel - i guess always ready and willing waiting for calls might be boring every now and then...) - checked the electronics, put in a new battery and followed me to the garage for difficult cars, where he took back the lifesaving battery. Garages don't work on Saturday, not even the special ones, so i had to leave Simba overnight, alone on the road. I hope that will teach him. 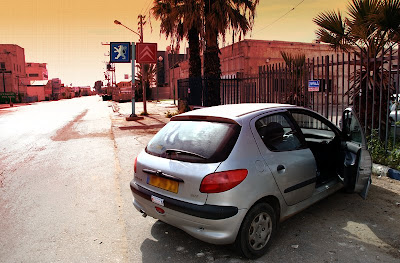 Posted by rubbergumlovinbear at 8:49 PM