Did you guys ever notice, that many birds are divas? You can watch them and they enjoy it, but as soon as you point a camera at them, and they have a bad day, they just fly off?
So I played a game with this little fellow - I always knew when he was there, sitting on the cable just 1-2 m away from my window, because he clacked with his beak, a bit like a storch, but different sound.
So I took the camera and he flew away, just before I could get the shot. In the end I hid behind the sunblends, and got it. I won't win a contest, that's for sure, but it became a matter of personal pride. 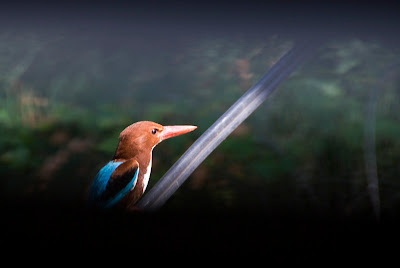 /edit (4/6/11) I already have a better picture, which i'd like to share here. this little fellow is a white-throated king fisher btw and i've seen his brothers & sisters in yardenit today. 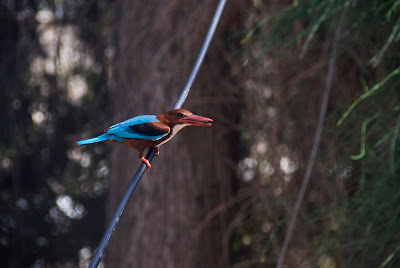 Posted by rubbergumlovinbear at 6:48 PM